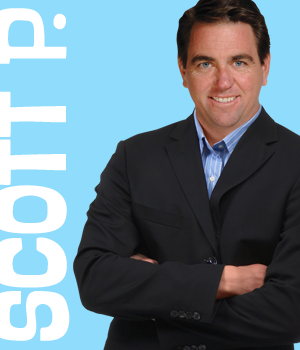 and first started in the financial services industry in 1988 as a Loan Agent for Sierra Federal Savings and Loan. He then attained his MBA from Cal State Fullerton in 1993.

After 9 years as a Marketing Manager and eventually as a Vice President in Private Banking, Scott decided he had enough of the corporate world, passed his broker’ s license and started Progressive Realty. He quickly learned this new business, and by 2000 was the top agent in the City of Placentia.

Wanting to get involved in the decision making of the city, he ran for the city Council of Placentia and won his election in 2000. After 8 years on council and serving three years as Mayor, Scott left local politics to focus on real estate sales, management, new construction and property management.

For years, Scott’ s slogan was “Scott P. Brady, the “P” stands for Placentia, but now he has decided to team with his daughter to form “The Brady Bunch of Realtors” and allow a second generation of family Realtor to join his team. He still offers his “8-Step Home Preparation Plan” and his “6 Seller Guarantees” that allow him to sell his home more quickly, for more money and at a savings to his sellers compared to the typical agent. Now his clients have the luxury of working with two agents at the cost of one.

Scott's knowledge of the area and attention to detail are amazing. He was patient with our first-time home buyer issues and made us feel like her only clients. Scott was more than a realtor for us and made us feel welcome in a new state!

We had a triplex that was providing good income but it was time to to sell after more than 20 years. We wanted to do a 1031 exchange and invest in like kind properties which can be a daunting process. Scott found a near full price buyer for the triplex and helped us find two investment properties within the allotted time. Both of the properties are now incoming producing and we couldn't be happier. He was aggressive on behalf of our interests and always felt he was looking out for us. We've referred him to our family and friends and they love him too.

Bri helped us both buy and sell our home. She is amazing!!! The process was made extremely easy because of her knowledge and experience. When we bought our home, there were 12 other offers, and the seller chose our offer (thanks to Bri‘s advice). When we sold our home, Bri helped us decide on the list price, helped with staging, and had great photographs taken. Within a week, we had a full price offer. Also, whenever we had any questions she was quick to respond. When we are ready to buy our next home, we’ll definitely be going to Bri again.

Bri was very patient and knowledgable about any and all questions I had. She was very helpful when I first met her last summer, and when I contacted her today about a house, she remembered me and was just as helpful. Because of this, we are going to sign a purchase contract with her very soon. I highly recommend working with her if you get the opportunity.